Simon duly collected his last point off Kevin to win the tournament for 2019 - congratulations! Bas came in second with 5.5 points after defeating Rob L, and Ruari pocketed the bronze medal, half a point behind. Best performance for the tournament though, goes to Sean Macak, 12th seed, who finished fourth after a good win against Ben. Patrick was happy to win his shortest game of the tournament, 5 moves, as Peter M misplayed the opening and resigned.

In the Reserves, Chantelle and Leonard fought it out, with Leonard's passed pawn being the decider, giving him first place on 5.5, a half point ahead of Dan and Dylan. He is on the up and up, and will be playing in the A grade next year, at this rate!

Below, Simon and Kevin chat, pre-game, and Leonard and Chantelle absorbed in the opening. 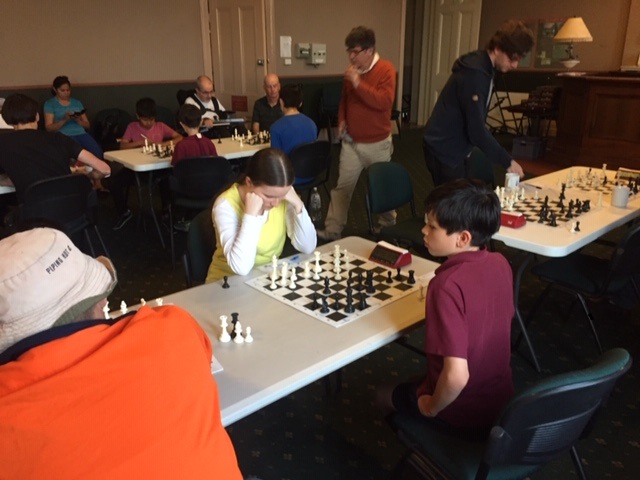 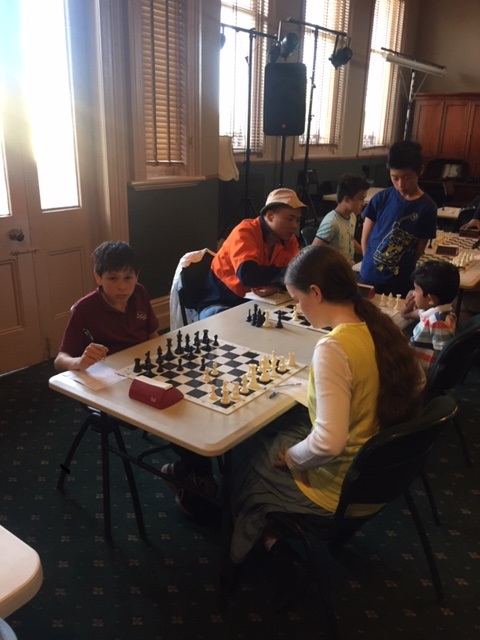 Above, Patrick half way through his game, on move 3, and Peter W plays Ruari. Leonard and Chantelle on a busy table.

With only one round to go, the A grade winner is decided: Simon Rutherford has enough points to stay home and still win the tournament. Being at the top has its own pressures - you're expected to win every game. Simon has not disappointed with his 6 wins and after each game he analyses the moves with his opponent, so it's a learning experience for all.

The Reserves, on the other hand, is down to a tie between Chantelle and Leonard. As they are fairly evenly rated, it should be a humdinger of a finish to the tournament! If Dan wins his game and Chantelle and Leonard draw, then it will be a 3 way tie! The only upset in Round 6 was Dylan defeating Anna. 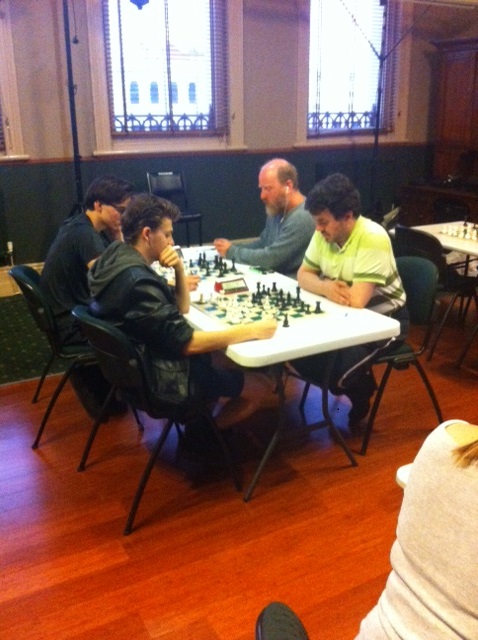 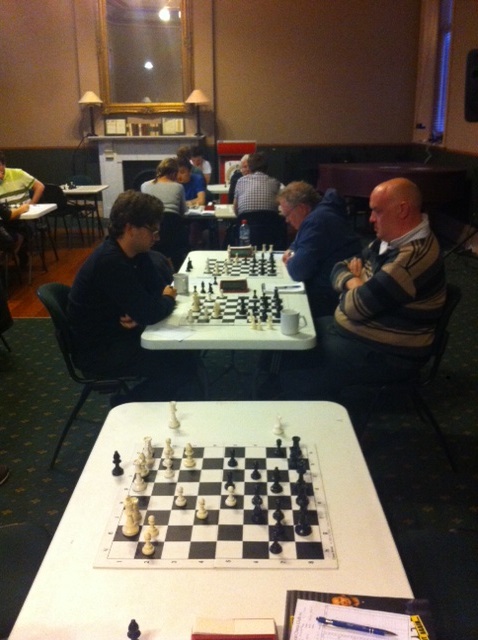 Tournament leader, Simon Rutherford, caught up and won his game against Ruari Coffey on the weekend - still undefeated and a point and a half ahead of the nearest contender. The biggest upset for this round was between twelfth seed, Sean Macak, and second seed, Bas van Riel; Sean held Bas to a hard fought draw. Ben Naughton steered clear of any nonsense and defeated fourth seed Harrison, who had employed a characteristic dodgy opening defence. Kevin took down Rob L in a blazing Kings Gambit Accepted - no prisoners were taken in his swashbuckling attack. Cassandra was able, through careful play in a Nimzo Indian, to earn a draw from Patrick, who, when faced with a cramped position with only a Bishop and Knight off the board, decided he had had enough chess after 15 moves. Hossam, suffering from neck pain, fought well to overcome Tom in a fairly even game, utilising his better pawn structure to take the point in the endgame. In the Reserves, Michael Schreenan defeated top seed Leonard Goodison to reach equal first position with Dan Wang, who had 1/2 point bye. Chantelle found a way to activate her pieces in a forest of pawns, defeating her dad, Jasan, in an adjourned game. Gus Tatman managed to draw against Ian Boyle, as did Kanishk against Gustav. 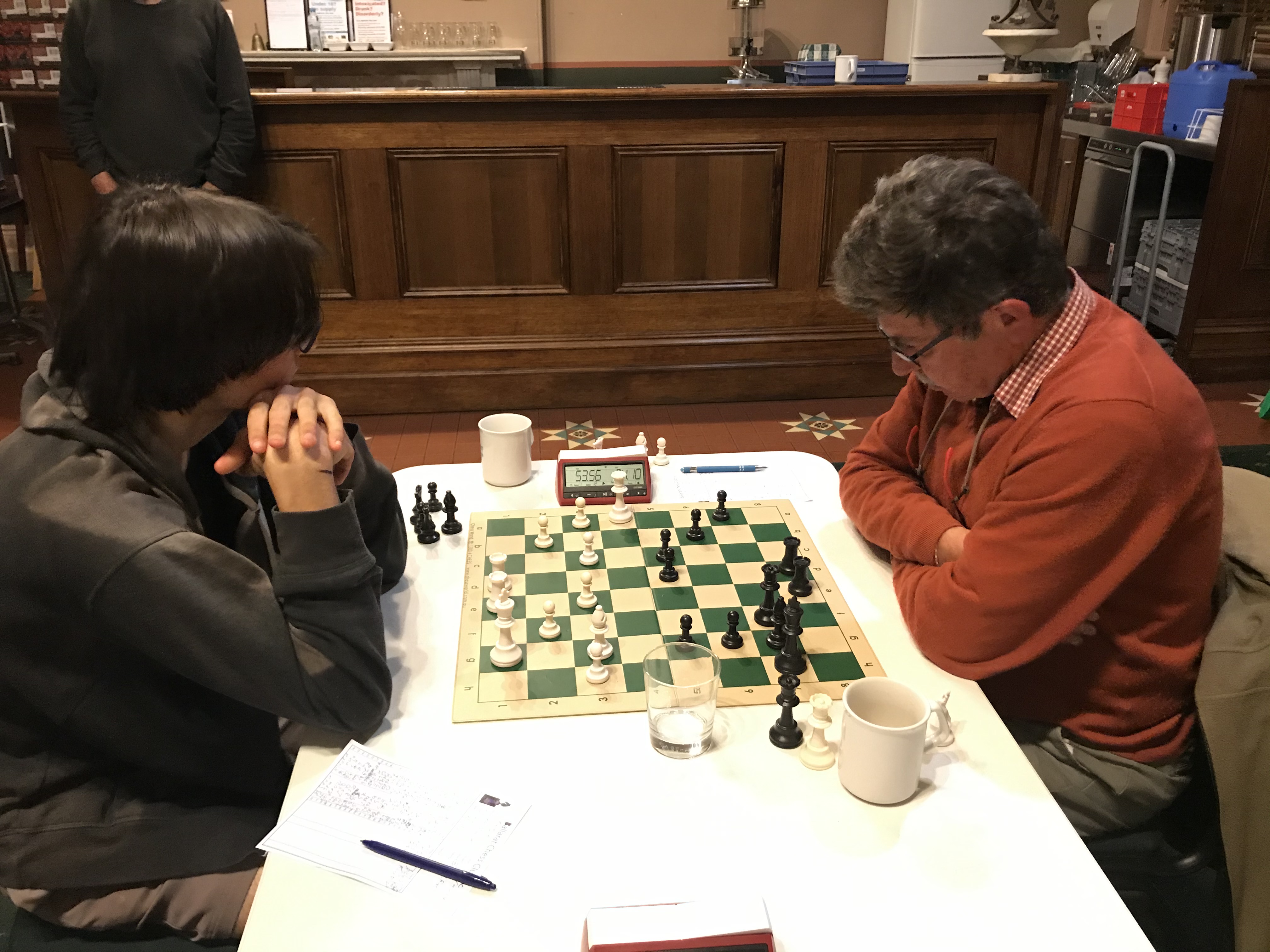 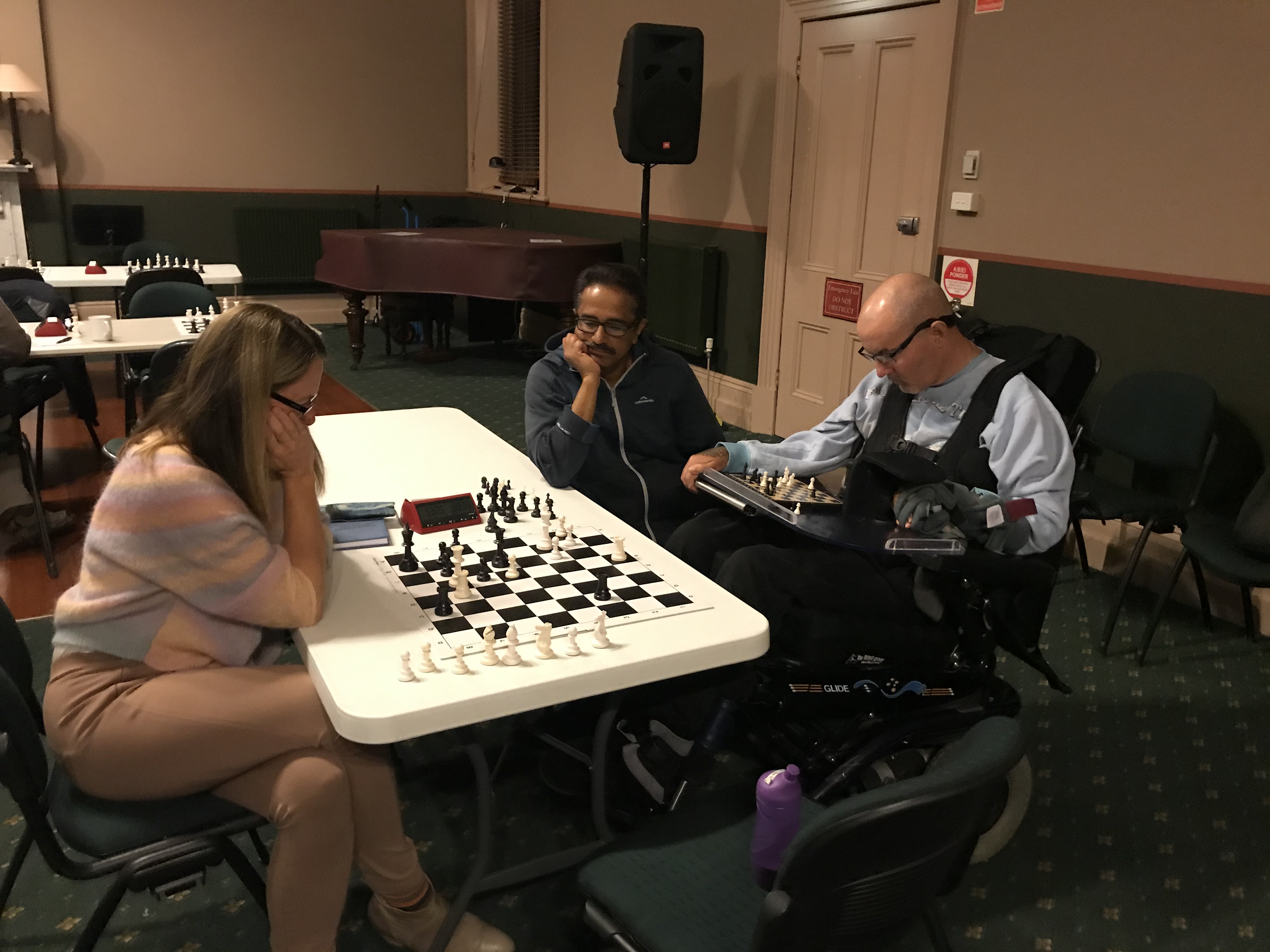 All games went as expected with the exception of Peter Wang who defeated Peter Miitel. In the Reserves Leonard and Dan lead the field by a half point, with Michael hot on their heals after a good win against Kalen in Rd 4. Next round's top game between Simon and Ruari has been postponed, and third place Sean will be playing Bas who is half a point ahead. Ben, who is also punching above his weight this tournament, will be playing Harrison, and Tom will be playing newcomer Hossam, a very competent player we are pleased to see joining the tournament. 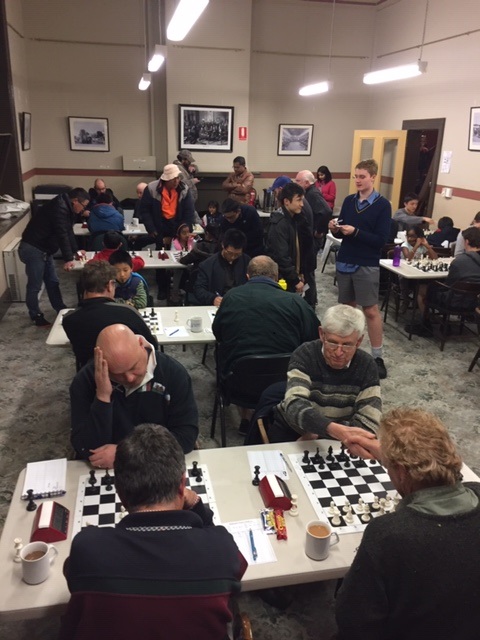 The Arthur Koelle tournament had a visitor pop in as games were beginning - Arthur quietly viewed some of the action and caught up with friends.

Round 3 had one upset, Ben Naughton defeated Patrick Cook, not wasting any opportunities and converting a material advantage by swapping off all the big guns. Ruari and Sean had a real battle, even up until the endgame, both sides had chances but a slightly sub-optimal move choice by Sean gave Ruari what he needed. Simon faced a good challenge by Bas, but on move 25 Bas missed the correct continuation and handed the game to his opponent. Harrison played through a dodgy opening to defeat Kevin, Peter resigned to Tom in an even position as he had to go home, and Cassandra rushed a move after a solid game with chances for both sides, handing Rob a checkmate in one. 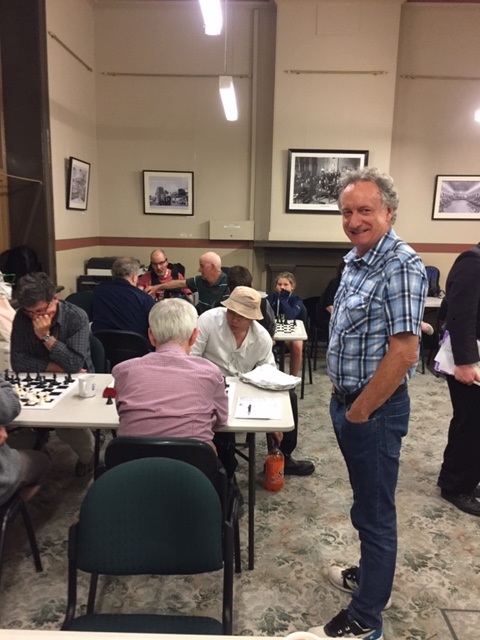 In Round 1 there were no upsets but 5 of the ten participants took a half point bye. In Round 2 Sean beat Rob L after Rob blundered trying to handle a blistering attack on his kingside, barely out of the opening. Once again there were 5 half point byes.

In the Reserves, Justin beat top seed John Aczel on Board 1, while Sasha held Anna to a draw. Young Kanishk also managed to draw against Chantelle after a blocked up game ending with rooks and pawns drew to a standstill. In Round 2 upsets included Dan taking out Michael, and Ishan defeating Anushka. 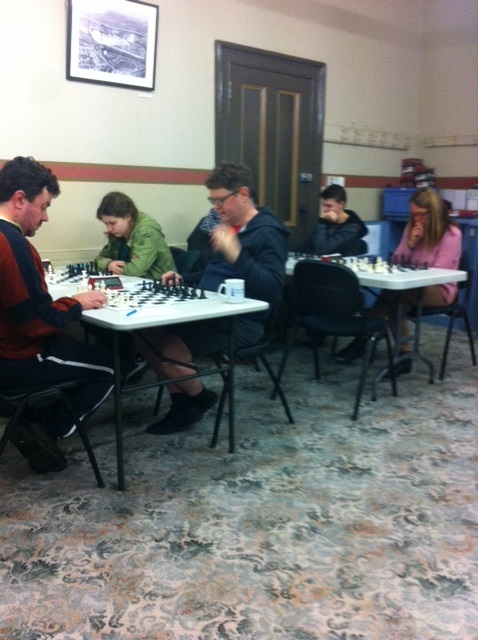 To all members and chess players,

On this Thursday the 2019 Koelle Tournament will commence at the clubrooms at the Ballarat Mechanics Institute and your participation is invited. The first round will be at 7.30pm so please arrive earlier or advise the Tournament Directors (see below) of your intention to play. The Tournament will be held in 2 separate divisions which will be based on recent ACF ratings. The Tournament will be held over 7 consecutive weeks under the Swiss format. Players who are unable to attend on any night are welcome to nominate two half point byes, provided they do so no later than the previous week. This is designed to add flexibility and encourage those who may be absent for some weeks to participate. The nominated Tournament Directors for this event will be Jasan Barnett and Rob Loveband. If any player wishes to request a half-point bye for any round including the first or if they have any query about the conduct of the event then they should contact Jasan or Rob. The best number to call or text messages in that regard is for Rob on 0438 530 431. In the case that he is not available then try Kevin Perrin on 0418 533 517, since Jasan does not have a mobile number.

We are hoping that Arthur Koelle will be visiting Ballarat from Germany during the Tournament so members will have a chance to meet him and possibly challenge him to a quick game.

Enter your games at Chessmicrobase

Mr. Arthur Koelle was Victorian Junior champion in 1968 at 14, Country Victorian champion in the same year, and Club champion, also in 1968 as well as 1969. Most of these achievements are age records to this day! He went on to win the Australian Junior championship in 1971. Arthur has been living in Germany since 1982 and competed in the famous Bundesliga club competition, mixing it with experienced grandmasters, up until the mid-1990’s when work commitments became more pressing. Due to rising numbers of participants the original round robin format for the A Grade has now become a Swiss tournament, while the B and C Grade tournaments' format depends on the number of entries. The inaugural tournament was held in 2011.